Welcome to the Readle.co.uk Blog!

I will try to keep the blog up to date and use it to discuss topical subjects within the world of Engineering or just what I have been up to (with pictures of interesting Engineering I have seen!).

I have thought a bit about what to discuss in my first ever blog post, should I make it an in depth critique of the state of Engineering in the UK? Maybe an opinion pieces on some of the key themes or issues in Engineering at present? In the end I settled for sticking to what I know best and have therefore decided to discuss a large historic rail bridge near where I live: Bennerley Viaduct!

The ground conditions around the Viaduct were poor due to the large amount of mining activity in the area, therefore a wrought iron viaduct was chosen over the more conventional masonry arch viaduct. This helped to reduce the total weight of the structure and reduce the risk of settlement. The superstructure is formed of multiple simply supported spans, this allows the structure to deflect to accommodate differential settlement without imposing significant additional loads on the structure, another advantage over a comparable continuous span or a masonry arch viaducts. 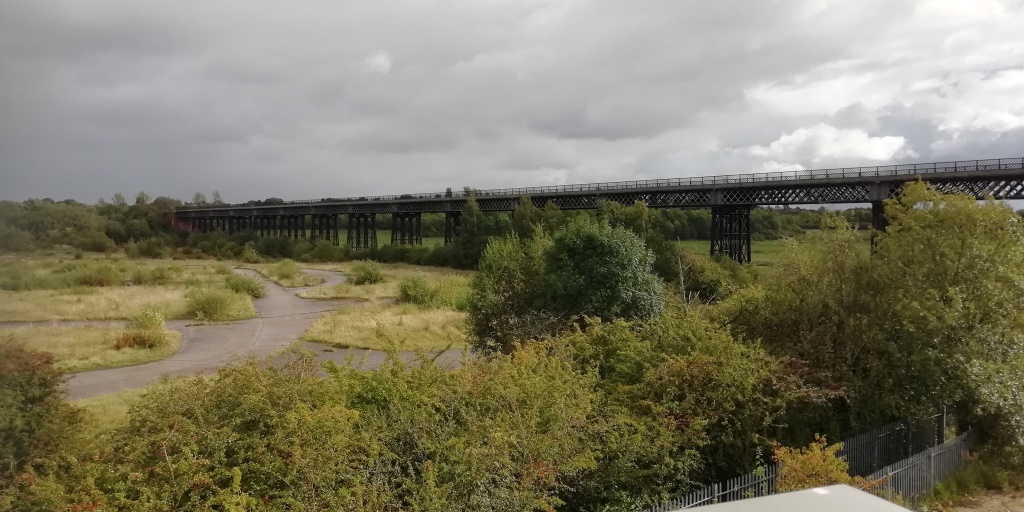 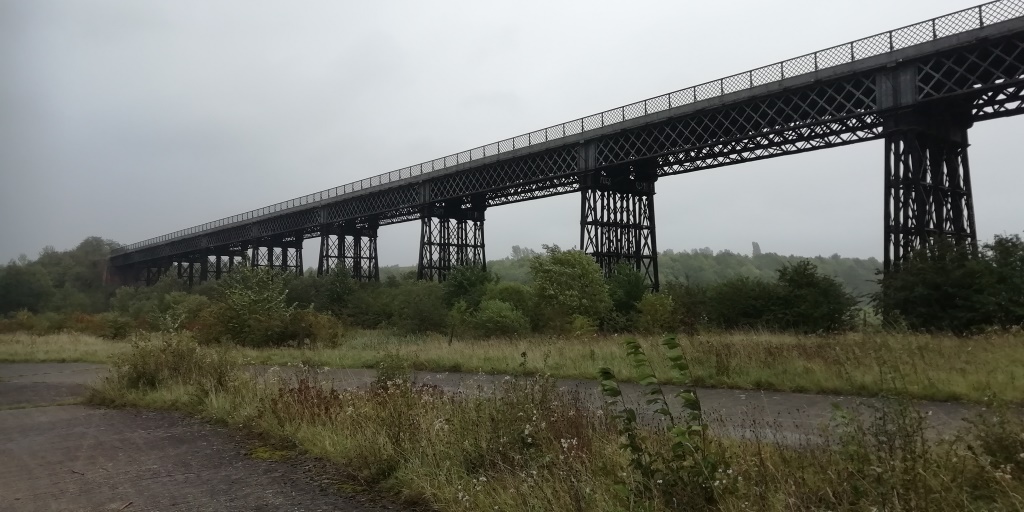 Bennerley Viaduct is one of only two surviving Wrought Iron viaducts of it’s type in the country, the other being the Meldon Viaduct in Devon. The original Tay Bridge which famously collapsed in 1879 was of a similar form of construction to Bennerley Viaduct, though Bennerley Viaduct was clearly of a more robust design.

The viaduct is formed of sixteen 76′ 7″ (23.3m) spans, with the total length of the viaduct and approaches being 1452′ (443m) long. Spans are formed of three parallel riveted wrought iron lattice girders, which in turn supports a transverse trough deck. A lattice girder is similar to a truss, however the diagonal elements that form the girder web intersect with each other, often multiple times, whereas a more standard truss will often just have diagonals that only intersect the top and bottom chord. The intersection with other elements helps to reduce the buckling length of the compression diagonals, allowing the web elements to be made of more slender sections.

The substructure is formed of wrought iron trestle piers, comprising 12 fabricated circular hollow column sections arranged in a varying pattern from edge to edge as follows: 1 inclined column, 2 verticals, 3 verticals, 3 verticals, 2 verticals and 1 inclined. This arrangement positions half the columns (3 + 3) almost below the middle lattice girder, as the middle lattice girder supports approximately twice the load of the edge girders this is a sensible arrangement.

The fabricated circular columns are made of four quarter circle flanged sections (quadrants) that are then riveted together. Due to the length of the columns, quadrant sections could not be formed long enough and so shorter quadrant lengths needed to be spliced together. Usually when splicing shorter elements together additional plates are added across the joint to transfer load out of the end of one section and into the start of the new section, these are called splice plates. The circular columns do not have splice plates and instead the joints are staggered, with a joint in one quadrant at one location while the remaining quadrant continue passed the joint, these other quadrants are then jointed further along the column length. This is not the most efficient use of material as areas exist where only a proportion of the full circular section is effect due to the presence of the non-spliced joint.

The photos above show that most of the trestle diagonals and horizontals are either bolted or wedged together, instead of being riveted like the column sections. This could suggest that the column sections were fabricated either off-site or in a dedicated area nearby, whereas the diagonal and horizontal elements were bolted together in-situ, once the columns were in place. This would prevent the need for riveting at height.

Bennerley Viaduct has been a remarkable survivor over its more than 130 year life. It survived heavy freight traffic for almost a hundred years and then managed to avoid being scrapped following the Beeching Cuts in the 1960s. Bennerley Viaduct also survived an air-ship raid during World War 1, the viaduct and nearby ironworks were one of the targets of the “Great Midlands Raid” undertaken on 31st January 1916. Fortunately the structure wasn’t hit and damage to the nearby area was limited.

The railway line crossing Bennerley Viaduct was closed in 1968 and the viaduct has laid derelict since then. However, a local charity the Friends of Bennerley Viaduct (www.friendsofbennerleyviaduct.wordpress.com/) have recently successfully applied for planning permission to reopen the structure as a cycle route. I wish them the very best with their restoration work and I am looking forward to dusting off the bike and cycling across this iconic structure in the near future!

To Top of Page